What does network of networks mean

A network is the combination of several computers or computer groups for the purpose of data communication.

Networks connect different computers or systems with one another in order to enable data exchange between these computers. 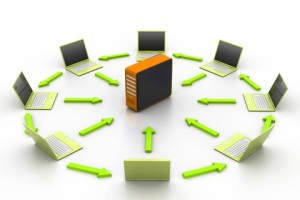 This not only has the advantage that both computers can exchange information; A network also enables the shared use of resources (all PCs in a network use the same Internet access or access the same printer, for example). Another advantage is that communication between different computers is also possible over a large spatial distance. For example, a company with two locations in Germany can still be systematically connected to one another.

Networks can be differentiated according to their spatial extent, i.e. their size.

The PAN (Personal Area Network) has a circumference of around 10m and describes the networking of devices in the immediate personal environment, such as the home network in the living room or the connection of PDA and computer.

The LAN (Local Area Network) has an extension of up to 900m and is mostly used in companies.

The MAN (Metropolitan Area Network) covers up to 60 km. The MAN is a city or regional network.

The WAN (Wide Area Network) is the wide area network and is designed for long distances and stretches across countries as well as continents.