How do i make an LCR circuit

Impedance calculations in the AC circuit

In circuits of alternating current technology with additional capacitive and inductive reactances, voltages and currents show phase shifts with respect to one another. They must be taken into account when calculating the total resistance, the impedance. The exact knowledge and correct application of the vector diagrams provides the key to the calculation approach. Combined LC resistor networks with series and parallel connections of the components must first be converted into their equivalent connections. At the end you get a pure series or parallel connection of reactive and active resistors. The impedance of the circuit can be determined with the help of the corresponding phasor diagram.

It is much easier to achieve your goal with the complex calculation. With scientific pocket calculators, you can quickly get the desired result with just a few key combinations. The user must first familiarize himself with the special operation of his computer, as there is no independent standard that the manufacturer must comply with. For the keys R → P, P → R, partly POL and x → y, the necessary conversion formulas are permanently programmed and can be used directly. 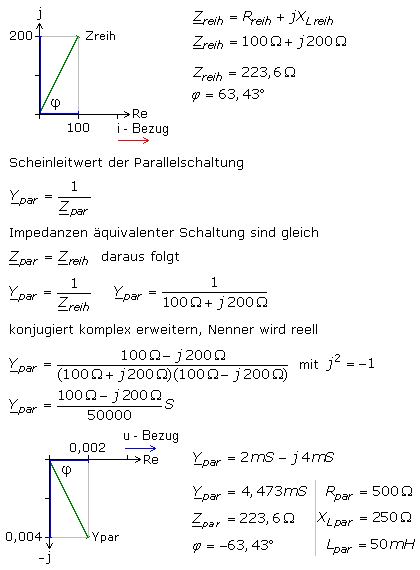 The complex impedance of the series connection is calculated from the sum of the two resistance operators. The reference value of each series connection is the current in the direction of the real axis. The operator of the effective resistance lies on the real axis with the pointer length for 100 Ω. The voltage at the inductance leads the current by 90 °. The operator of the inductive reactance pointer length XL = 2 π · f · L = 200 Ω lies on the positive imaginary axis.

The equivalent parallel connection must have the same impedance. In the case of a parallel connection, the voltage is the reference value that lies in the direction of the real axis. The vector diagram of the conductance operators is used. The reciprocal of the admittance Ypar of the parallel circuit is the parallel impedance Zpar and should be equal to the series impedance Zreih of the given circuit. In a step-by-step calculation, the complex denominator becomes real through complex conjugate expansion and the component form for the admittance is obtained. The reciprocal values ​​of the individual components result in the resistance values ​​sought for the equivalent parallel connection.

The two equivalent circuits are made up of different component values, but have the same electrical properties. It is thus possible to calculate mixed resistance networks in alternating current technology.

For the following mixed resistor network, the impedance and the phase angle between voltage and current for a sinusoidal input voltage are calculated using the complex calculation. Both sub-circuits, the RC parallel circuit and the RL series circuit, can be calculated independently of one another. The result is two partial impedances with two phase angles different from 90 °. It is therefore not possible to simply summarize using the Pythagorean theorem.

In the polar diagram of the Gaussian numerical level, the operator of an effective resistance and its conductance lie on the real axis. The reactance operator and the associated reactance value lie on the imaginary axis. Both are mirrored to each other on the real axis, since the reference value, which is always in the direction of the real axis, changes between current and voltage depending on the type of circuit. A capacitive reactance points down and lies on the negative imaginary axis. The capacitive susceptance points upwards in the direction of the positive imaginary axis. The pointer length corresponds to the calculated resistance value or the reciprocal conductance. The opposite is true for inductive reactance and reactance. 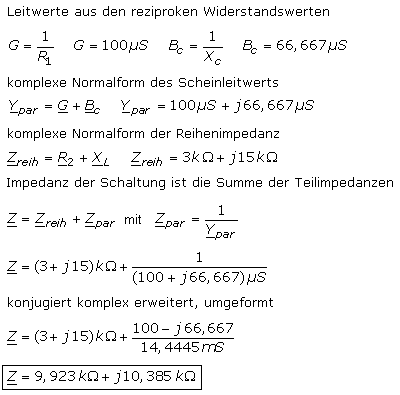 The pointer of the impedance Z is in the 1st quadrant. The phase angle is positive. The resistor network behaves like a circuit consisting of an effective resistor and a coil. The result in normal form shows the intercepts on the real and imaginary axes. For the exponential form of the impedance, the pointer length is calculated from the square root of the sum of the intercept squares. The phase angle follows from the arctangent of the quotient of the imaginary to the real component. 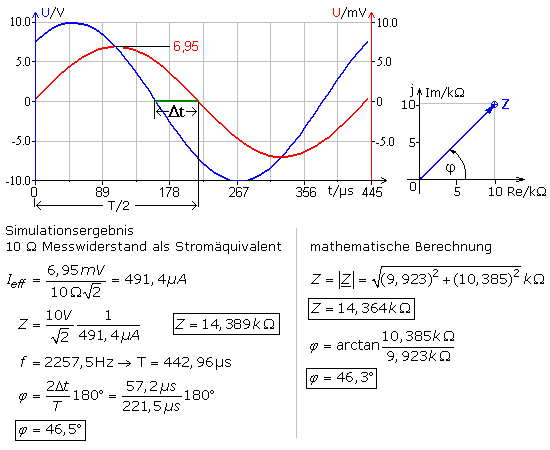