What comes after postmodern society

Present diagnoses
In which epoch do we actually live? 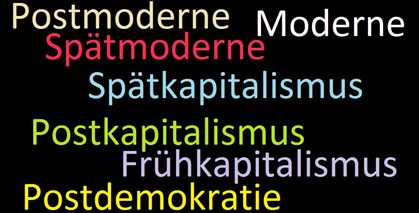 In which era do we actually live? | © Goethe Institute

“Late” and “post” diagnoses are once again booming; they relate to modernity, capitalism, but also to democracy. Hans-Martin Schönherr-Mann sums up a debate recently initiated by Thomas Assheuer, Armin Nassehi, Hartmut Rosa and Boris Groys in the weekly newspaper “Die Zeit”.

Minerva's owl, which the ancient Greeks regarded as the bird of knowledge, begins, as we have known since Hegel at least, its flight only at dawn. That is to say: the mind never grasps the present, but always only the past in the present. For Hegel, this led to the simple realization that one cannot look into the future. Karl Marx saw it differently, who confidently announced the impending proletarian revolution. With his confidence in the future, Marx stands entirely in the scientific tradition of the Enlightenment, which wants to dominate nature by making its processes repeatable in experiments.

Industrial society made practical use of the scientific method with great success. Only the social consequences of industrial development have proven to be not really controllable to this day. In this respect, one has to agree with Armin Nassehi that all late and post diagnoses with a view to modernity and capitalism refer to claims and hopes that have not yet been met. It is about the controllability of the economy and society, distributive justice and pluralism. Talking about postmodernism therefore falsely suggests that modernity is over and that we are living in a new era.

Loss of a central perspective

But not only the present, also the recent past does not reveal the epoch in which we live. For Armin Nassehi, this could be due to the fact that a central perspective on modern society has long been lost because its various subsystems - economy, law, science, welfare state - follow their own logic and cannot be combined with one another. That is why one can no longer bring the epoch to a uniform term. Talk of postmodernism does not develop a uniform perspective on contemporary society, nor does it develop a new concept of epoch. In the best case - and this is what Nassehi admits to late as well as post-diagnoses - such social-scientific findings represent self-descriptions of society, which are relevant if they prove to be compatible with social discourses.

Hartmut Rosa vehemently contradicts this and agrees with Thomas Assheuer that late and post diagnoses were wrong from the start and are only celebrating a return today because, with the global financial crisis of 2008 and its aftermath, central aspects of modernity are in question: capitalism as such, democracy, and thus modern society as a whole, which is unable to keep its integrative cultural and welfare state promises. On the other hand, Hartmut Rosa Nassehi's question of sociological self-description accuses that this sociology is not interested in the needs of people and does not provide answers to the questions of the future of modern society.

Above all, however, this society still has a central perspective for Rosa, namely the logic of economic growth, growth and acceleration, which is essential for social and economic stability. He sees the danger of excessive acceleration in this. But the fact that the promise of prosperity has not only been fundamentally in question since the global financial crisis, that the gap between rich and poor has widened for decades, does not seem to impress him. It is possible that other institutions have long since stabilized modern society. Modern society no longer reproduces itself as a unit. Boris Groys indirectly confirms this when he states that traditional institutions are disintegrating.

The end of everything taken for granted

In one respect, Thomas Assheuer and Boris Groys misrepresent history with very different intentions: The term late capitalism owes itself to the left social criticism of the 1960s and expresses a certain hope that the idea of ​​socialism could perhaps become a reality after all. The model of Soviet Socialism was hardly meant, so that one may also ask to what extent these movements actually, as Groys suspected, owe themselves to the Cold War, or rather whether they are not in spite of of the Cold War developed. The concept of postmodernism was also directed less against Western society than against the illusory hopes for social progress that mainly liberals and leftists - from the Social Democrats to the Communists - associate with modernity. That is why its representatives are so allergic to it to this day, while conservatives are sometimes even sympathetic to the term. With the end of the real existing socialism, the hopes of social democracy collapsed, because after 1989 the social question no longer seemed to be on the agenda, while capitalism was unleashed neoliberally.

Talk of post-democracy also has a different background than that of the Cold War. It only became really popular in the 1990s, when the economy began to influence politics more and more. In the times of socialism in Eastern Europe, such criticism would simply have been dismissed as communist propaganda. The word post-democracy only got a different meaning after 1989, when democracy appeared to be triumphant in Eastern Europe, in South America, and even in Africa. It is correct that the talk of post-democracy as the rule of capital over politics received new fuel after the world financial crisis.

In short: The many late and postal terms in circulation must each be viewed in a very differentiated manner. They always express different sociological diagnoses of the present. Today it is no longer a matter of course in which society one lives. And certainly not at all you can easily come to a common idea of ​​the society in which you actually want to live.

Do you have any questions about this article? Write us!