What is the importance of valve testing

With the Dunlop valves, a non-return valve must be overcome by means of a stronger counterpressure from the pump. In earlier Dunlop valves, a rubber hose served as a check valve, which is why they were difficult to inflate. A special form of the Dunlop valve is called the Blitz valve. The rubber hose was replaced with a built-in check valve. This enables inflation with significantly less force. Nowadays the term Dunlop valve mostly means the modern Blitz valve, because the old design with hose has practically died out. Most Dunlop valves are not suitable for high air pressure, but there are some versions that are suitable for high pressure. It is characteristic that Dunlop valves are screwed into a thread on the hose and are therefore easily exchangeable. However, this also makes them easy to steal or sabotage. Because the valve is not opened mechanically, but by the compressed air (from the pump), the air pressure in the bicycle tube cannot be measured. However, there are designs that circumvent this disadvantage.

Previously used exclusively on racing bikes, the high pressure-suitable Sclaverand valve (also French valve) is now also used on light touring and MTB tubes. The prerequisite for filling is the screwing (opening) of the small knurled nut on the valve stem protruding from the valve housing. In contrast to the Dunlop valve, the French valve is opened mechanically when the pump is attached. This makes it possible to measure the air pressure. However, some air is always lost when the pump is put on (and taken off), so these processes have to be done quickly. When putting on the pump, care must be taken not to bend the valve stem (the valve should point vertically downwards when inflating, i.e. the pump should point upwards). After inflating, the knurled nut must be screwed back on; With this very sensitive type of valve, it is also particularly important to put on the valve protection cap.
There are different valve lengths on offer, as so-called 'V-rims' or high-profile rims, which require particularly long valves, have been manufactured for several years.

Racing bikes cannot be inflated sufficiently with conventional hand pumps or at many petrol stations. You need foot pumps or special racing pumps to achieve the high pressures (from 8 bar).

The Regina valve is very similar to the French one, but was used almost exclusively in Italy. 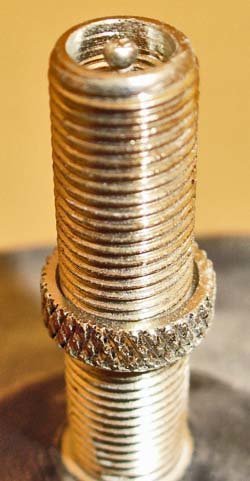 Schrader valves are mostly found on mountain bikes. The air flow (opening the valve) takes place mechanically by actuating a fan pin located in the valve. This makes it possible to measure the air pressure in the bicycle tube. By turning the clamping lever of the pump, a small bolt is pushed forward in the pump head, which pushes in the fan pin of the valve and thus opens the valve. Therefore, with Schrader valves, the pump should be pushed as far as possible onto the valve so that the fan pin can be safely reached. At the same time, the valve connection rubber of the pump must completely seal the valve, otherwise air will flow out in an uncontrolled manner. Schrader and Dunlop valves require a larger hole in the rim than a Sclaverand valve.

One advantage of the Schrader valve is the ability to inflate the tires at gas stations without using adapters. The main disadvantage of the car valve is that, compared to the other valve types, the lowest maximum pressure can be generated with a hand air pump.

Using various adapters, you can adapt unsuitable valves to air pumps or petrol station compressors, from left to right

If you want to use a tube with a Sclaverand valve in a rim with a hole for a Dunlop or car valve, the valve is loose and can be torn out of the tube by bending. On the other hand, an adapter that is inserted into the rim hole from the inside helps.