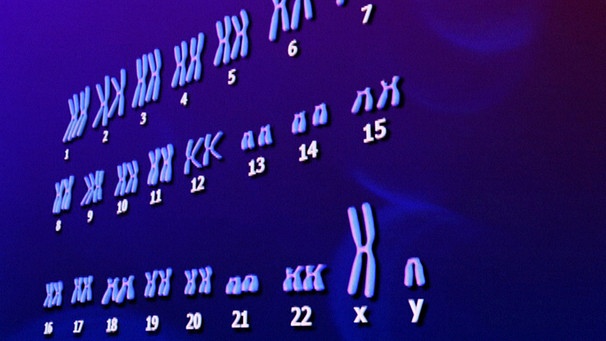 All genetic phenomena can be traced back to one building block: the genetic material, the deoxyribonucleic acid - DNA for short. The term DNA - from English "deoxyribonucleinacid" is more common. DNA has all the characteristics that make up the appearance of living things.

The cell is bounded to the outside by the cell membrane. Inside the cell there is liquid: the cytoplasm. In the middle of the cell is the nucleus, also called the nucleus. It is also bounded by a membrane. What is inside the cell nucleus? What is happening there? The video on the right shows it. 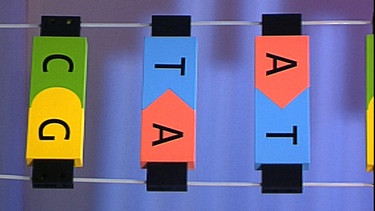 The DNA thread is constructed like a rope ladder. The backbone of the ladder consists of a sugar, deoxyribose, combined with phosphate. The rungs of this ladder are made up of four organic bases: adenine (A) and thymine (T), cytosine (C) and guanine (G). A binds with T, C binds with G. No other combination is possible.

The rope ladder is turned helically around its own axis - this increases stability. The technical term for this screw is helix. In the case of DNA, there is a double helix. The diameter of a helix is ​​about two nanometers, that's two trillionths of a meter!

The genetic material controls all cell processes. When the cell reaches a certain size, it divides. Then the genetic thread takes on a more compact form by twisting it strongly. This makes the transport form of the DNA visible - the chromosome. Humans have 46 chromosomes in each nucleus. Two identical pairs form a pair - a total of 22 pairs of so-called homologous chromosomes plus two sex chromosomes - XX for women and XY for men.

In every chromosome there are certain sections of DNA - called genes. Characteristics - such as blood group - are defined in them. Humans have 30,000 - 50,000 genes! The gene is the place where a trait is defined. The expression of this feature is determined by the base sequence at this gene location.