What exactly is Neven's Law

In 1965, then Intel CEO Gordon Moore published a paper describing an annual doubling of the number of components per integrated circuit. His forecast: This growth rate would continue for at least another decade. In 1975, Moore revised his prediction that the number of transistors in a dense integrated circuit would double every two years for the next decade. Indeed, for decades this has been the case. This development resulted in an astonishing increase in computing power, which in turn triggered enormous technological upheavals. Moore's Law has been obsolete for several years because chip manufacturers have reached the limits of what is physically possible to produce integrated circuits: They have now reached the size of atoms at which transistors begin to fail and electrons seep into other components.

There was a similar law in storage known as Kryder's Law. Seagate's Mark Kryder assumed that disk density, also known as areal density, would double every 13 months. Over a period of 41 years, the surface density increased 50 million times. However, as of 2015, the Kryder Act no longer applied.

Despite everything, the growth in computing power beyond our (at least my) wildest dreams will continue to explode. Moore's Law is replaced by Neven's Law, named after Hartmut Neven, the director of the Google Quantum Artificial Intelligence Lab. Neven explained that with each new upgrade to Google's best quantum processor, the performance growth not only grows exponentially, as in Moore's Law, but doubly exponentially.

According to an online article by InterestingEngineering.com, a doubling exponential rate would mean the n in the doubling function replaced by another doubling function, or 22 to the power of n to replace.

“Since Moore's law is a doubling function, we can visualize Moore's law as follows, where n represents a two-year interval: 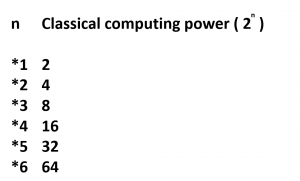 Neven's law with double exponential growth would look something like this: n corresponds to each new improvement to the Google quantum processor:

As the list rises above 6, the numbers become so large and abstract that you lose track of where Google is now and the next step.

What does all this power mean?

This means that we will be able to solve computational problems that traditional computers could never deal with. Quantum computers cannot solve transaction problems as quickly as conventional computers. On the other hand, they can solve computationally intensive problems such as encryption and optimization in seconds, where a classic computer would take the entire lifespan of the universe to attempt a solution.

Modern computers with high computing power may at some point be able to crack 256-bit, 512-bit and even higher-quality encryption keys. But all you have to do to put them in their place is multiply the number of bits used for the key by 2. In one fell swoop, the new scheme would be exponentially stronger than the one that has just been cracked. The extension of RSA keys can very quickly lead to the fact that it takes millions, billions and even billions of years more time to crack the encryption with a classic computer. In quantum computers, this limitation (also known as time complexity) is lifted.

When do we see quantacomputer in production use?

While many quantum computer experts believe that we won't see a quantum computer until 2025 or even 2030, Neven's law suggests that Google will be rolling out a quantum computer by the end of this year. In all likelihood, we will see solutions from quantum computers or quantum-like computers in the next few years. What is currently still missing are higher-level languages ​​to map problems on qubits. This is like the beginnings of classic computers, in which developers and researchers did everything in machine language.

Do good with computing power

Quantum computers will be particularly helpful in solving problems with social innovations that require computational optimization. Many challenges of social innovation require a large number of contributions, for example to recommend the optimal distribution channel or medical treatment. In spite of all the euphoria, the dark side, which allows encryption codes to be cracked, should not be concealed. But researchers are working on ways to protect the privacy of data even in the age of the quantum computer. 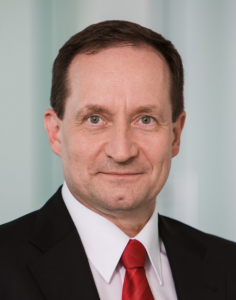