Has anyone had facet joint injections

The first clinical symptoms are only slowly noticeable at the beginning. The back of the head and neck pain is in the foreground. This quickly becomes chronic and increases with head movements. The incipient damage to the spinal cord (myelopathy) is shown by weakness in the extremities, unsteady gait (initially often only in the dark) and abnormal sensations in the arms and legs (dysesthesia). Disturbances of the fine motor skills in the hands are typical. Unfortunately, these alarm signals are often not taken seriously by those involved, but justify the rheumatic changes in hands and feet. The onset of spinal cord damage is therefore often overlooked.

The rheumatic instability of the cervical spine can be divided into three stages. Stage I: Horizontal instability between the 1st and 2nd cervical regions (atlantoaxial subluxation). The extent of instability is determined by measuring the distance between the anterior arch of the atlas and the tip of the dens (Atlanto-Dentale distance = ADD). Stage II: The MRI of the cervical spine shows the relative elevation of the dens in relation to the head. This leads to a narrowing of the exit point for the spinal cord at the base of the skull (foramen magnum). Stage III: The mechanical overload causes the individual cervical vertebrae to shift against each other (“staircase phenomenon”). The instability now affects the entire cervical spine (subaxial subluxation).

The development of damage to the spinal cord (cervical myelopathy) is possible in principle at any stage of the disease. The development of such a myelopathy is of decisive importance for the further course of the disease, since the rheumatic damage to the spinal cord without surgical treatment often leads to a rapid increase in neurological deficits with loss of the ability to walk.

A major problem in the early diagnosis of rheumatic cervical instability is due to the fact that many patients initially show only a few symptoms. In addition, the clinical examination by the doctor is often ambiguous. First damage to the spinal cord can best be detected by a detailed neurological electrophysiological examination (evoked potential measurement: sensory (SSEP) and motor (MEP)).

As a screening examination, a lateral functional recording in flexion is necessary for all patients after the diagnosis of RA. A normal lateral x-ray is not sufficient, as early instabilities between the first and second CU (stage I) can be overlooked in up to 50% of cases. To assess the atlantoaxial instability, the anterior atlanto-dental distance (ADD) is determined (Figure 1). A relevant instability can be assumed from 5mm. The recording of functions should be repeated regularly to monitor the progress. The time intervals at which this has to take place must be made dependent on the individual course. In our experience, two-yearly check-ups are sufficient for most rheumatism patients. If there is a mutilating form of RA or if the response to basic therapy is poor, the control intervals should be shorter. Supplementary x-rays to further clarify the findings only need to be taken if there is evidence of instability. If the question of a surgical indication arises, an MRI is necessary for surgical planning. A routine MRI examination of the cervical spine in rheumatic patients is not advisable.

When treating the rheumatic cervical spine, it is important to distinguish between treating symptoms and influencing the further course of the disease. Conservative therapy is primarily aimed at improving the patient's subjective complaints. Many forms of therapy are not specific to the cervical spine, but address the entire clinical picture of RA. Patient education: Before initiating any therapy, conservative or operative, the patient should be fully informed. In our own experience, there is a large information deficit in most patients with regard to the rheumatic cervical spine. In addition to the special anatomy of the cervical spine and the specific changes in the context of rheumatic diseases, the patients should above all be instructed about sensible behavior in everyday life (e.g. avoiding strong flexion movements of the head in the event of instability). At the same time, it is important to inform rheumatism patients about alarm signs of the onset of cervical myelopathy (e.g. newly emerging gait insecurity in the dark).

The physiotherapeutic treatment of the rheumatic cervical spine is to be seen in connection with the treatment of the entire clinical picture. Particularly in the early stages of instability, the specific cervical spine problems are often not in the foreground. Cervical pain is primarily mediated through increased muscle tone, so that muscle relaxation is an important form of therapy. At the same time, isometric exercises in particular should be practiced to strengthen the deep muscles in the upper cervical spine (flexion, extension and rotation). When training the larger neck and shoulder girdle muscles, exercises in active flexion and maximum rotation should be avoided.

The question of the necessity of immobilization with a neck tie is of great importance for most rheumatism patients. The low level of comfort stands in the way of the need to be able to prevent further damage through external protection. In principle, external immobilization of the cervical spine cannot lead to permanent stabilization of rheumatic instability. The indication for prescribing a neck tie is therefore limited to the treatment of pain. It is important to ensure that the tie is sufficiently strong. The psychological effect of a “protective tie” should not be underestimated either and should be taken into account in the conservative therapy concept despite the lack of scientific justification.

The symptomatic treatment of pain due to cervical instability is based on the usual criteria for pain therapy in rheumatism patients. In addition, local cortisone injections can be carried out in the painful areas of the neck and head muscles.

Optimizing the basic therapy can also lead to a reduction in cervical complaints. Far more important, however, is that early and effective drug therapy can also be expected to have a positive effect on the natural course of the disease in the cervical spine.

The question of the right time for surgical treatment is controversial. The indication is clear when neurological damage occurs, as well as with persistent severe pain. From our point of view there is also an indication for surgery in the case of electrophysiologically proven spinal cord damage (pathological SSEP and MEP), as well as in the case of radiologically confirmed increase in existing instability. The question of prophylactic surgery in the case of clinically silent but radiologically recognizable atlantoaxial instability (stage 1) cannot yet be clearly answered. Current clinical studies show a decrease in inflammatory tissue due to stabilizing surgery. After successful stiffening of the atlantoaxial instability, there also appears to be no increase in further osseous destruction. However, a standstill of the rheumatic destruction is possible even without an operation. Such an indication must therefore be discussed individually with the patient, whereby the specific course of the disease also plays an important role in addition to the surgeon's personal experience.

This means a stiffening operation between the 1st and 2nd HWK (Figure 2). This is possible in stage 1 of the disease, when there is no vertical instability or relevant destruction of the head joints. The surgical technique of choice is screwing the atlantoaxial joints on both sides. In addition, a bone chip from the iliac crest is deposited between the posterior atlas arch and the spinous process of the second cervical region. 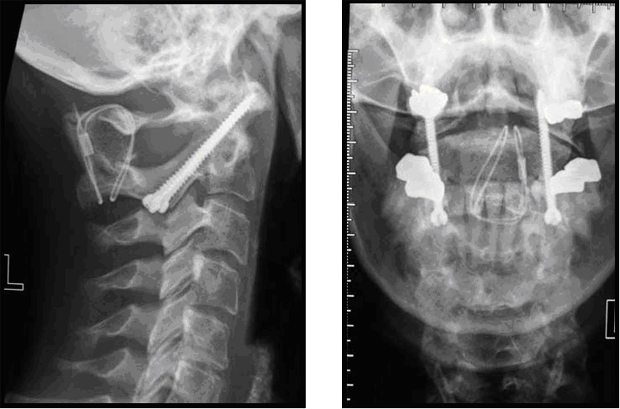 Post-operative x-ray after a stiffening operation between the first and second cervical vertebrae (atlantoaxial fusion). Stabilization takes place with two titanium screws, which are inserted through the joint connection of the vertebral bodies (transarticular screw connection). The bone graft from the iliac crest is attached with a titanium cable between the posterior arch of the first and the spinous process of the second cervical region. 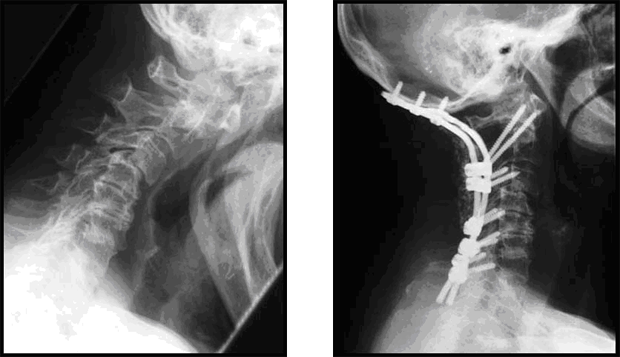 The left x-ray shows a complex rheumatic instability of the cervical spine with involvement of the head joints and the lower cervical spine (stage III). During the operation, the back of the head with the entire cervical spine is stabilized in the best possible position (C0 to A17). The fixation is carried out with titanium screws and rods. In addition, bone is deposited by the iliac crest.

In this operation, the operative access is through the mouth (transoral). The indication is when the displaced tip of the second CU (dens) continues to press on the spinal cord. With the improvement of the surgical techniques from behind, this elaborate procedure is seldom necessary for rheumatism patients.