How often do Indonesians shower

Something that every visitor to Indonesia sooner or later gets to know is the Kamar Mandi - the Indonesian bathroom.
Cleanliness is very important here. The often asked question “Sudah mandi?” - "Have you already showered?" is often synonymous with "Hello, how are you?"
But for the Indonesian novice, such a Kamar Mandi (bathroom) can be a challenge. In a typical Indonesian mandi there is a large open water basin and a ladle. Most Kamar Mandi also have an integrated squat toilet. You do mandi by pouring a refreshing gush of water from the basin with the large ladle. You lather yourself and pour yourself over again. The water basin should not be misused as a bathtub. This would not be very hygienic, as water in the basin is only refilled and the basin itself is rarely completely emptied and cleaned properly.
The squat toilet is the next challenge. It is important to keep your balance and to position yourself correctly (you also want to hit). You will look in vain for toilet paper. To clean, you take the ladle in your right hand, hold the ladle filled with water behind / under your bottom and use your left hand to spray water onto the areas to be cleaned. Not splashing your whole pants wet, only real Indonesians can do it. 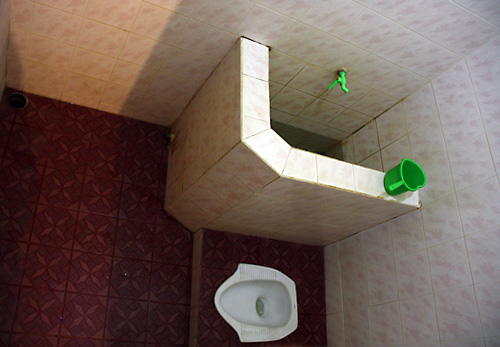 But people get used to a lot surprisingly quickly. I even think the refreshing water pouring of the Mandi is really great. It's just quite a waste of water. And the squat toilet. I got used to that too. It should even be healthier, it trains the thigh muscles and is definitely more hygienic than a sit-down toilet (especially if cleaning the bathroom is not taken so seriously). Fortunately, there is also toilet paper to buy in the shops (although the Indonesians use the rolls as hygiene towels rather than toilet paper). Furthermore, the squat toilet is also significantly more economical in terms of water consumption. Only hand soap is a must - in public toilets (and in most office buildings) as rare as original software on Indonesian PCs.
Meanwhile there are also a lot of “Western-Style” toilets. - Indonesians want to be “modern and progressive” and a toilet seat (despite its disadvantages) is part of their worldview - only with the use of it some Indonesians still have their difficulties, as the following picture from a hotel shows. And that's not a joke, I myself know people who squatted with their feet on the toilet seat ... sitting would hurt ... 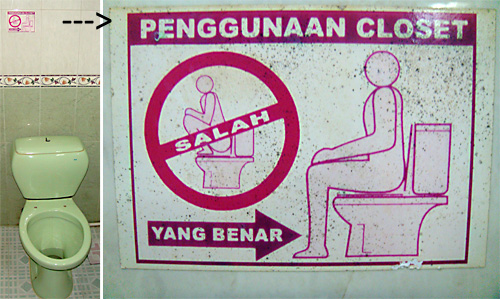 Instructions for using a western-style toilet - “salah = wrong” “yang benar = so it's right”.

There are also all possible combinations. Sometimes the Bak Mandi (the water container) is just a large tub or a bucket. 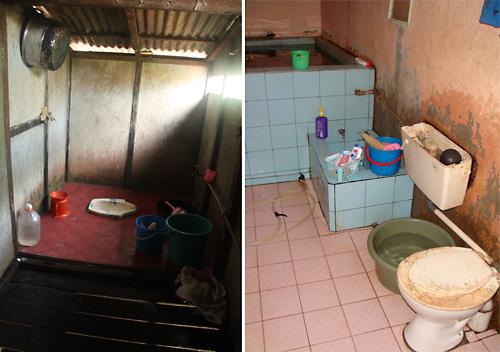 Mandi in a mayor's house. Please do not misuse the water basain as a bathtub!

However, there are also many families who don't even have a Mandi in their home. Especially in the villages you can often see this, but even in the cities many houses near the river only have one float toilet. A plum toilet with the largest flush in the world, so to speak. But this raft is also used as a washing and bathing area, which is not exactly hygienic if the neighbor is doing “his business” in his raft toilet immediately upstream. In the villages you can often see the floss toilets lined up close together along the river. But at least this toilet is easy to clean and there is always running water. 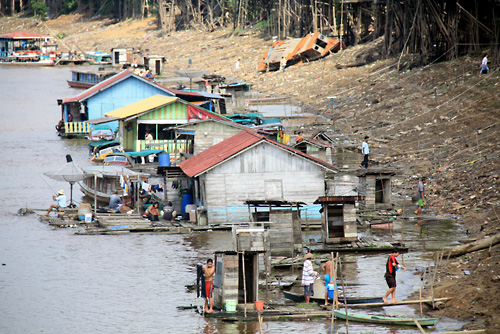 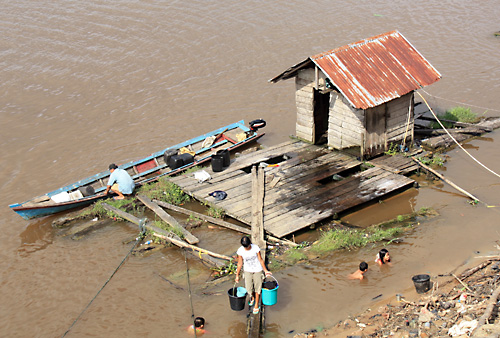 The river mandi. Bathing places, toilet and boat dock in one.

However, when the river becomes a trickle in the dry season, this type of mandi is no longer very beneficial. 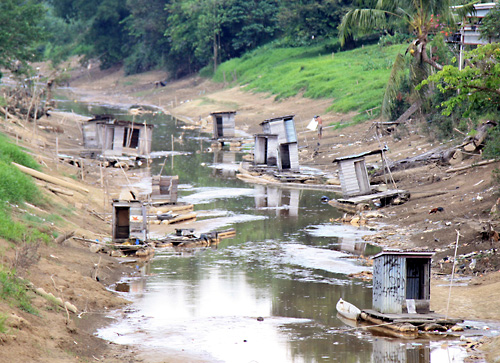 Dry toilets in the almost dry river bed of a tributary of the Sibau River in Putussibau.

The bathing area on the river is often used for washing and bathing. Even if you have to bring yourself to walk to the river, you will be rewarded with refreshingly cool and (unless gold is being mined in the upper reaches of the river or heavy rain tarnishes the river with sediment) very clean water. Better than any shower or bath! 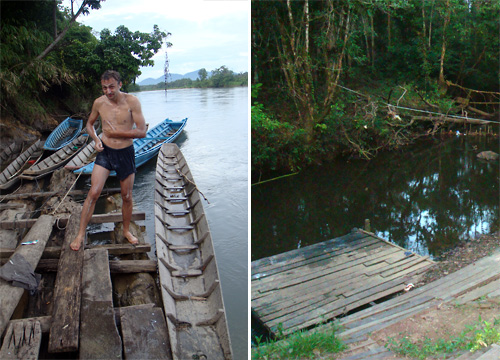 In addition to these admittedly simple toilets and bathing areas, there is also the other extreme in Indonesia. In Jakarta Airport, for example, you can watch fish while urinating, in the aquarium hanging above the urinal ... 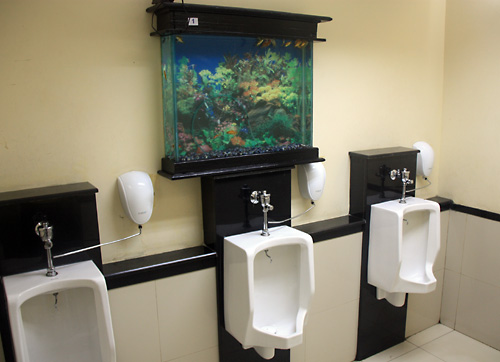 Aquarium in the men's room in Jakarta's airport.

If you are interested in finding out more about sanitary systems, I would like to refer you to my diploma thesis. Ecosan - A sustainable solution for the sanitary problems of the marginal settlements of Lima (Peru)? (pdf, 1.5 MB) I dealt with Ecosan concepts for periurban areas in the city of Lima (Peru). And toilets play a very important role in this.

This entry was posted in Uncategorized on by nangka.
<?