Buddhists around the world celebrate the Vesakh festival in memory of the birth, enlightenment (nirvana), death as the "complete extinction" (parinirvana) and the end of the rebirth of Buddha. The festival, which originally comes from the Theravada Buddhism tradition, is celebrated on the first full moon day of the month of Vesakha - May or June. Depending on the calendar system used and local customs, the date of the celebrations in Southeast Asia varies. Vesakh has been recognized as an official holiday by the United Nations since 1999. 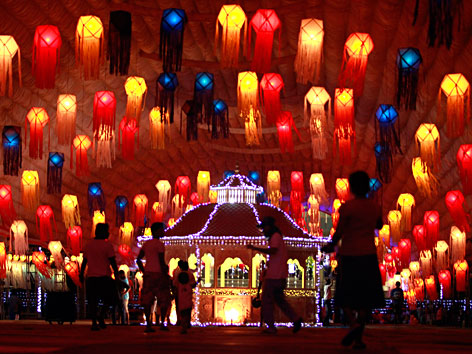 Festive jewelry for the Vesakh festival

In the Buddhist countries of Southeast Asia (Thailand, Myanmar) and Sri Lanka, Vesakh is the biggest festival of the year. The international Buddhist flag is hoisted, people fast, dress in white and visit monasteries to listen to the monks' sermons. Flowers and incense are also offered. 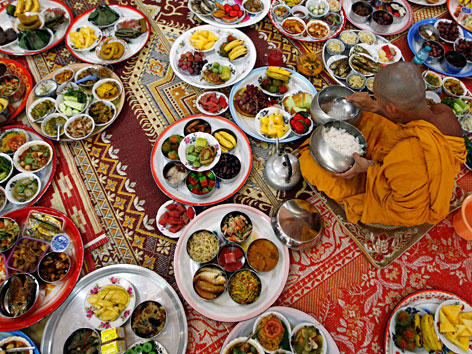 A Buddhist monk is given food intended as an offering for the dead.

On this day, special care is taken to keep the five Buddhist commandments (five sila - more on this in the entry Buddhist Faith Practice). There is a vegetarian diet, sexual abstinence is practiced and no alcohol is consumed. Some particularly devout Buddhists do without a soft bed, jewelry and perfume on this day and spend the whole day in the temple.

A common custom is to give freedom to captive animals such as fish and birds in order to commemorate the basic Buddhist idea of ​​acting for the benefit of all beings. Charitable engagement for needy people and monasteries is also a common custom, especially on this occasion. 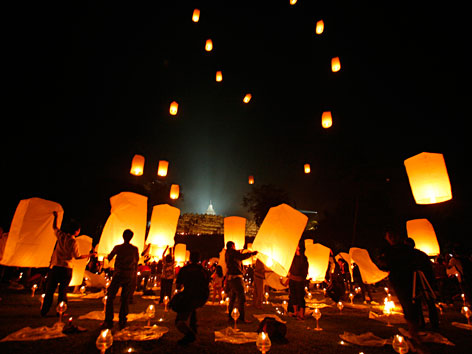 Chinese lanterns at a Buddhist temple

Vesakh celebrations are also organized in Germany and Austria. In Vienna, the ÖBR (Austrian Buddhist Religious Society) celebrates at the peace stupa on Handelskai.