How is Indian airplane as a career

The handover of the first two Hindustan HF-24 Marut to the Indian Air Force on May 10, 1964 crowned eight years of hard work during which the German-Indian design team, under the leadership of the well-known aircraft designer Professor Kurt Tank, planned and built India's first independently Hunter had created. The engineers and technicians thus laid the foundation stone for the aviation industry there, which until then only had experience from building the de Havilland Vampire under license.

A dedicated jet fighter for India

Since 1956, the then Indian Defense Minister Mahavir Tyagi supported the ambitious demand of the Indian Air Force for a multi-role fighter that could be used as an interceptor, a ground attack aircraft and a reconnaissance aircraft. The Bangalore-based company Hindustan Aeronautics Limited (HAL) took on the order to develop the Mach 2 fast fighter. At the same time, the company, founded in 1940, planned a light jet trainer that would later become the HJT-16 Kiran.

It soon became apparent that the Indian design team could not oversee both projects at the same time due to a lack of capacity and experience. Hindustan therefore sought help abroad and found it: Dr. Kurt Tank accepted the invitation to develop the fighter and arrived in Bangalore in August 1956. Tank had previously designed the Pulqui II in Argentina.

First of all, almost the entire infrastructure in India, including a suitable runway, had to be built out of the ground. The design team initially consisted of only 18 German and three Indian engineers as well as 22 Indian assistants, but was soon increased to over 160 people.

First attempts with a glider pilot

Just 22 months after the start of development, the test pilots Wing Commander Suri and Wing Commander Kapil Bhargava were able to carry out a total of 78 test flights with a two-seater glider model of the Marut in full size from April 1, 1959, which was towed to altitude by a Douglas C-47.

After eleven months of assembling the first prototype, the Marut with the serial number BR462 took off on June 17, 1961 in Bangalore with Wing Commander Suranjan Das on its maiden flight. A week later, the official presentation took place in front of an euphoric audience. At this point Kurt Tank paid tribute to the excellent Indian technicians.

The aerodynamically excellent design, however, suffered from the unsolved engine issue from the start. Originally the Marut was to be equipped with two Bristol Orpheus 12s. This engine with an afterburner of 47.09 kilonewtons was intended for the winner of the NATO Lightweight Strike Fighter competition. However, Bristol stopped work on the Orpheus 12 after the tender was not carried out and offered India a private continuation of the program. However, the financial risk made such a decision intolerable for India.

Hindustan was therefore interested in the Tumanski RD-9F of the Mikoyan MiG-19 and purchased six engines for testing purposes. But hopes failed because of the Soviets, who refused to pass on technical information. The flight speed limit of Mach 1.4 was not allowed to be exceeded. In addition, the engine proved to be extremely short-lived and unreliable. Nevertheless, the Indian leadership decided in 1963 not to give up the project and, as an interim solution, to equip the Marut Mk 1 and the prototypes with the Orpheus 703 without an afterburner until a suitable engine for the definitive HF-24 Mk 2 was available. Despite intensive efforts, the engineers should not find anything; the Marut Mk 1 remained the only production version.

HAL later tried, together with the Indian Gas Turbine Research Establishment (GTRE), to equip the Orpheus with an afterburner, and modified the second pre-series machine BD-829, now referred to as the HF-24 Mk 1A, with the Orpheus 703R, which was up to 27 percent more powerful. Two other machines were equipped with an afterburner as the HF-24 Mk 1R, but the performance demonstrated in 250 test flights did not justify the effort. In addition, an HF-24 Mk 1R crashed shortly after take-off, killing pilot Das.

Hindustan then turned to the United States to exploit the Marut's Mach 2 potential. The offer of the American government to finance the conversion of the Rolls-Royce RB 153 for the projected EWR-Süd VJ 101 D for use in the Marut, however, failed because of their demand that India in return for the planned license production of the Mikojan MiG- 21 should do without. Instead, the Indians resorted to the E-300 engine developed by Professor Ferdinand Brandner in Egypt for the light delta hunter Helwan HA-300. The HF-24 Mk 1BX, which was parked for testing from Hindustan to Helwan, flew on March 29, 1967 with an Orpheus and an E-300 with a smaller afterburner and an output of 41.56 kilonewtons. After 150 test flights it became clear that the Marut could not fly faster than Mach 1.1 even with two E-300s. The Indian government therefore called the development team back from Egypt in July 1969 and gave the HF-24 Mk 1BX to the factory in Helwan.

Tanks order, however, was already finished with the commissioning of the Marut Mk 1 equipped 10th Squadron in April 1967, he returned to Germany. By 1978, HAL produced a total of 132 HF-24 Mk 1 and 18 two-seat Mk 1T. The first trainer, with the registration BD888, did not fly until April 30, 1970, because the Indian Air Force had initially considered a two-seater to be superfluous. Instead of the missile magazine located behind the pilot's seat, a second Martin Baker Mk-84C ejector seat was installed. 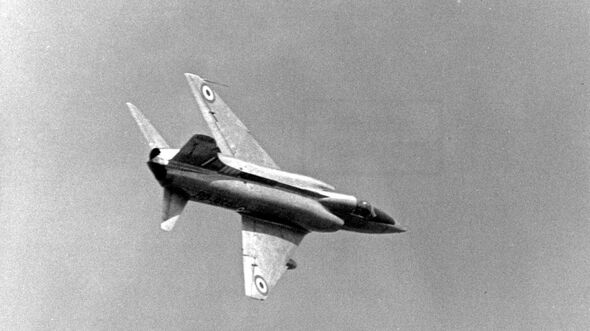 The twin-engine Marut was the last aircraft program that Kurt Tank was involved in. Photo and copyright: KL documentation

The Marut was used as a ground attack aircraft in the 10th Squadron "Dagger", the 220th Squadron "Tiger's Head" and in the last Marut squadron, the 31st Squadron "Ocelots", which was launched in 1973 by the Dassault Mystère IVA had converted the Indian own product. The test was imminent in the war against Pakistan in 1971. On December 4, Maruts of 10th and 220th Squadrons attacked Pakistani air bases from their forward bases in the Thar Desert.

In the following days of the war, the HF-24 flew missions against Pakistani tanks and vehicle columns. The only aerial combat by an HF-24 took place three days later. Two Maruts encountered four Pakistani North American F-86 Sabers during a ground attack. Squadron Leader Bakshi shot down a Saber with his Aden cannons.

The Marut proved to be an extremely reliable and easy-to-maintain aircraft in use. It was very popular with its pilots because of its good flight characteristics and as a stable weapon platform.

HAL also stuck to the Marut. The engineers constantly examined improved versions with more powerful engines. Kurt Tank, meanwhile working for MBB in Munich, suggested a German-Indian cooperation for the development and production of the HF-24 Mk III in 1972. The design, later referred to as the HF-73, was to achieve speeds of Mach 2 with two Turbo-Union RB199s. For this, the front fuselage, the air inlets and the stern including the control surfaces had to be changed. Six prototypes and 200 series machines were planned. However, the project failed because the RB199 tornado engine was not yet available. Hindustan was not discouraged by this and planned a single-jet Marut with the Snecma M53. HAL even built a wooden mock-up of the HF-24-M53 in 1975. But again the escalating development costs of the engine thwarted the Indian engineers' plans.

Despite being underpowered, the Marut showed an astonishing longevity. The last copies were not taken out of service until the beginning of 1990. The reliability of the HF-24 rewarded the tenacity of the aircraft builders and government in India. Despite problems, they stuck to their own design instead of going the easy way by buying foreign aircraft and giving away the expensive know-how.