How to say revolt in French

A city in France is removing meat dishes from the school menu. The nation is in turmoil.

The Green politician and mayor of Lyon, a gastronomic stronghold, removes meat dishes from the menu in schools. And so the drama takes its course.

LYON - Grégory Doucet, the gentle mayor of the Greens in Lyon, hardly gives the impression of a revolutionary. But when he announced last month that lunches for 29,000 children in the city's elementary schools would soon run out of meat, he roused France.

A scandal! An ecological dictation that could signal the end of French gastronomy, even French culture! The ministers in the government of President Emmanuel Macron clashed violently. If Lyon, the city of beef snouts and pig ears, saucisson sausages and kidneys, actually enforced such an outrage, then the apocalypse would certainly be imminent.

He is a rather petite man, whose mischievous expression and goatee give him the touch of one of the three musketeers of Dumas. As a political newcomer who was elected mayor last year and is now sitting in a gigantic brocade-lined office with a nearly 8-meter-high ceiling, surrounded by the busts of his predecessors, he finds it a bit absurd that he, an apostle of simplicity, is , finally kicked off something bigger. He is stunned that the optimization of a menu in city schools has divided the nation.

“I had purely pragmatic reasons for my decision,” he affirmed with a wink. The aim is to speed up the distribution of lunch in times of social distancing by offering only one dish instead of the traditional choice of two main courses.

Not true, said Interior Minister Gérald Darmanin. He tweeted that the discontinuation of meat dishes was an "unacceptable insult to French farmers and butchers," which indicated an "elitist and moralistic" attitude. Julien Denormandie, the Minister of Agriculture, described the transition to a meatless lunch ordered by the mayor as "socially shameful" and "nutritionally absurd".

All this led the Minister for Ecological Change, Barbara Pompili, to speak of “prehistoric” beliefs that were full of “trite clichés” of these men, and she did not shy away from referring to her two cabinet colleagues as Neanderthals.

This heated debate over trivia made several things clear. In Mr Macron's government and party, La République en Marche, the relationship between right and left remains tense. The growing popularity of the Greens, who rule not only Lyon but also Bordeaux and Grenoble, has further exacerbated the cultural conflict between urban environmental activists and the French traditionalists in the countryside.

Last but not least, nothing upsets the French like disagreements about food. 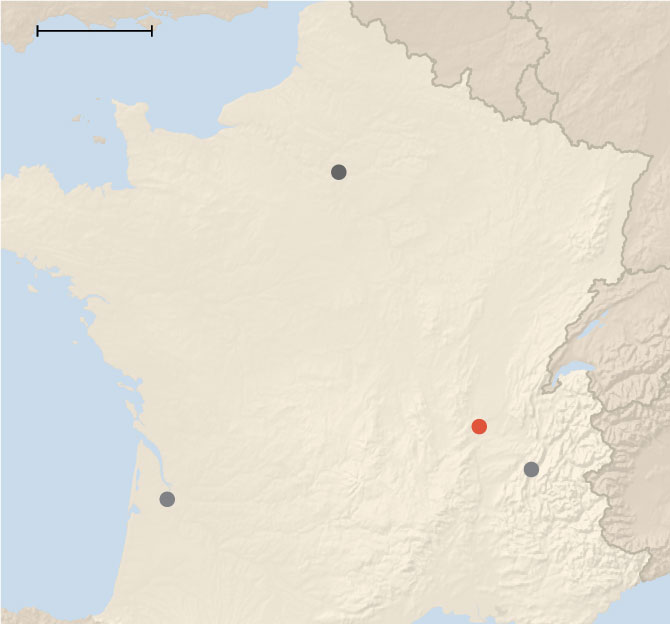 By The New York Times

It should be noted that the mayor made his move in a city with a deeply rooted gastronomic tradition. The Boucherie François, a venerable butcher's shop on the banks of the Rhône, is a showcase for Lyon's lavish meat culture. You can admire freshly slaughtered veal liver and kidneys; a plentiful selection of bacon-wrapped beef medallions; Heads of yellow and white chickens draped on a counter; Saucisson sausages, some with pistachios, in a wide variety of cylindrical shapes; a pâté wrapped in dough with a foie gras core and pointed legs and ears of pork, all of which testify to the “lust for meat” of this city.

“The mayor made a mistake,” said François Teixeira, a butcher who has been with François for 19 years. "It's not good for Lyon's image."

Sure, the mayor's decision came at a sensitive time. France's right-wing forces are outraged that, in their view, politically correct environmental dogmatism is currently imposing a path on the country that promises a future of bicycles, electric cars, veganism, local produce, negative growth in favor of the environment and general joylessness - something that has absolutely nothing to do with foie gras for private connoisseurs.

Last year, Pierre Hurmic, the mayor of the Greens in Bordeaux, hit a nerve when he banned the installation of the traditional Christmas tree in the city because it was "a dead tree". Mr Doucet's culinary measure was part of an “ideological agenda”, as the right-wing weekly newspaper “Valeurs Actuelles” proclaimed on its front page. "The school lunch in Lyon was just an excuse."

Mr Doucet, who describes himself as a "flexitarier", someone who prefers vegetables but sometimes also eats a little meat, pointed out that the Ministry of Education had given him no other choice. By doubling the distance at schools to two meters, the mayor was forced to speed up the distribution of lunch by offering only one dish.

"It's a simple math problem," he said. "You have the same number of tables, but you have fewer places available for the children, and you can't start your lunch break at 10 a.m."

But then why no meat on the plate? The mayor, who himself has a 7-year-old elementary school child, rolled his eyes. “We haven't switched to vegetarian food! The children can eat fish or eggs every day. ”Since a considerable number of schoolchildren had no appetite for meat dishes up to now, they only agreed on the lowest common denominator.

Doucet said this was not an ideological decision, although during his six-year tenure he intended to focus on “a greater proportion of vegetable protein” at school meals.

And the mayor added: “At the moment there are few options. You don't have the choice of going to a museum, the theater, or the cinema. In view of the national crisis situation, it is a cheek of the right-wing opposition to claim that I trample on our freedoms. "

Mr Macron struggles between his commitment to a green future and, as he put it last year, his rejection of an "Amish model" for France. The President is trying to differentiate the rational from an extreme environmental protection full of sanctions.

The president, who as usual wants to reach the broadest possible electorate before the regional elections in June, wants to address the conservative farmers, but at the same time also wants to be eligible for part of the Greens. During a recent visit to a farm he spoke out strongly against attempts to pursue a new type of agriculture based on "abuse, bans and demagoguery". In an obvious allusion to the Lyon fiasco, he said that "common sense" should be a priority in a balanced diet for children, noting, "We waste a lot of time on nonsensical arguments."

His government has proposed a constitutional amendment, the first since 2008, which, if confirmed by a referendum, should include the addition that France "guarantees the preservation of the environment and biodiversity and combats climate change."

France's right has spoken out against this change. Approval by the right-wing Senate is still pending. Another bill contains potential reforms for a greener future, including banning fossil fuel advertising and ending some short-haul domestic flights.

Mr Doucet doesn't care. “Macron is not an ecologist. He's a modern conservative. He knows there is a problem and so he is willing to make a few changes, but he cannot gauge the extent of the problem. Can you tell me one big step he's taken? "

The distribution of meatless school meals in Lyon is currently ongoing. The children seem to be fine. On Friday, an administrative court in Lyon denied requests by some parents, agricultural unions and local conservative politicians to overturn the mayor's decision, ruling that the "temporary simplification" of school meals did not pose a health risk to children.

As soon as the health crisis weakens - but not sooner - Mr Doucet believes that several dishes could be offered again as part of the school lunch, including meat dishes. In the meantime, the Minister of Agriculture of Denormandy has asked the Prefect of the Lyon region to examine the legality of the discontinuation of meat dishes.

“Mr Denormandie's accusation that we are anti-social is a lie,” said Mr Doucet. “He claimed we were denying carnal food to the poorest people in the most insecure incomes, which is wrong. He should have been fired immediately. "

According to Boris Charetiers, a member of a parents' association, the mayor will be closely monitored. "We're on guard," he said. “We don't want this to be a final decision. Our children cannot be hostages to ecological political beliefs. "

And as for Mr. Teixeira, the butcher, he remarked with a transfigured look at his huge selection of meat products: "There is a reason why we have canines."

Written with the collaboration of Gaëlle Fournier in Paris.